ILEGAL MEZCAL GAINS NATIONAL DISTRIBUTION AFTER BACARDI INVESTMENT – The story begins here . . . For nearly a decade, a small group of artists, musicians, writers and travelers has been drinking Ilegal Mezcal, a handcrafted brand of Mexican artisanal liquor with a notorious history that includes smuggling and weeklong parties in a clandestine bar in Guatemala.

Ilegal came out of John Rexer’s bar, Café No Sé, an eclectic international watering hole in colonial Antigua, Guatemala. “Ilegal has texture and is not diluted and polluted by an industrial process,” says Rexer. “It’s like old hand-tooled leather versus cheap pleather. It’s seductive. People from all walks of life understand the difference. It’s a way of thinking and wanting to live as much as it is fine liquor.”

Ilegal is made in Oaxaca, Mexico by small family owned distillers using traditional production methods and employing sustainable practices. The company since its inception has made social and environmental responsibility an integral part of their day-to-day practices.

Ilegal Mezcal began back in 2004ish, very informally and almost by mistake. I was bringing down mezcal from Oaxaca for my bar, Café No Sé, in Antigua Guatemala, and the mezcal became popular very quickly. At the time, we were bringing down unbranded mezcal from a variety of villages in Oaxaca that included: Tlacolula, San Lorenzo, Sola De Vega, Santa Catarina Minas, Hierve el Agua, Santiago Matatlan and a few others.

Is your mezcal really ilegal?? Let’s just say we were a bit creative in how we brought mezcal across the border. You see back in 2004, there were very few mezcals that were certified for export, almost none. Bringing a few bottles across the border was not such a big deal, but try getting 50, 100 or 500 bottles across and things get a bit interesting. Especially at the borders we were crossing where back then, the cops, the military, the gangs and just plain old thieves had to be eluded or navigated or co-opted, if you get my drift. It kind of began with us stuffing bottles into duffel bags, packing them as luggage under the bus and praying none of our bags would be inspected. Two people can bring 30 or so liters that way. But Oaxaca is a long way from Antigua. It is a day and half trip by bus and then running from village to village to buy mezcal is another couple of days or weeks. It’s an insane way to stock a bar. One day a mezcalero, whom I had been dealing with for sometime, proposed that I buy a pallet of mezcal from him.“You like my mezcal,” he said, “And it is crazy for you to keep busing up here every other week.” I had no idea how much was in a pallet. When he told me 600 bottles, I said, “Man, I have trouble getting 30 bottles across a border. How the hell am I going to get 600?” He looked at me and smiled and said an expression I have heard so often in Mexico. One I have come to love. That expression is: No te preocupes. Yo tengo un tío. Which means: Don’t worry about it, I have an uncle.

It turns out his uncle was part of a black market operation on the river between Hidalgo and Guatemala that transported everything you can imagine from one side to the other. By the way, this uncle worked in the mayor’s office. So, when I went to meet him at the address given me, I was a bit in shock. I had a pickup full of not so legal booze and I pulled into this sweltering border town known for its murder rate and look at the sign in front of the door which reads Alcaldía, Mayor’s Office.

So this was the first big run of Ilegal. Just after sunset I was taken to a warehouse on the border that in front was a popsicle factory and in the back, behind huge metal doors, was a vast space for goods to be taken across the river. When I say goods, I mean TV sets, stereos, prostitutes, car parts, gasoline, toys, animals, pharmaceuticals…you name it. The warehouse sat right on the river’s edge and our mezcal was loaded onto an inner-tube raft with wooden slats. Traveling with me was my girlfriend who was a 6’2” blonde East German and was rather stunning. She was wearing a black hoodie and I kept telling her to hunch over and not look at anyone. Might I suggest if any of you want to engage I similar activities in a Latin country, and want to appear inconspicuous, leave your Nordic goddess elsewhere. The river itself is not that wide, maybe a hundred meters. Once on the other side the maras unloaded our booze into a van I had waiting. It started to rain and we were knee deep in mud moving crates of booze. The only thing you can do is move as quickly as possible, act like you know what you are doing and get the fuck out of there. There are guns everywhere and it’s not a question of if you are going to be ripped off but a question of by whom. 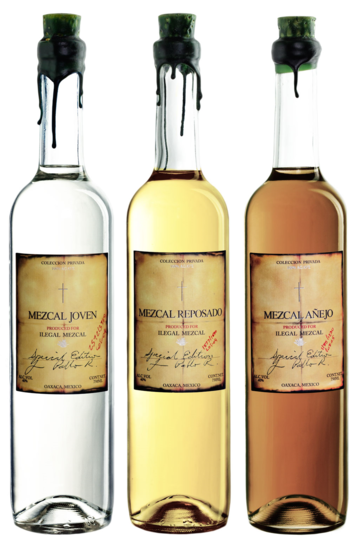 The brand will be part of Southern Glazer’s Transatlantic Spirits division, the companies said in a press release, following a minority stake investment in the brand by Bacardi.

The spirit is made from 100% espadin agave and comes in three expressions: joven, reposado and añejo.

Ilegal will continue to operate independently under the direction of its founder, John Rexer, the company says, and will maintain its own current business structure and employee base.

“The move to the Transatlantic division and the investment by Bacardi will help us do more of what we have done in the past. We will continue to make a great mezcal and market it our way,” says Rexer.